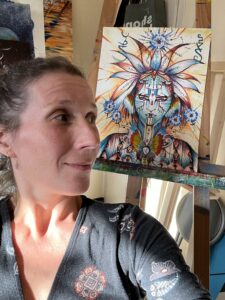 AXELLE is Alexandra Soulard Berthomé’s nickname.
Born in 1976, she unveiled her first paintings and painting performances in 1994, on the Nantes electronic scene.
In 2000, she began to paint on the bodies and to design her own characters. During 12 years of experience in the fields of stage, opera, cinema, photography, as an artistic make-up artist and decorative painter, what will remain important for her will remain her artistic expression and her creations.
After years also spent alongside future mothers with her project « Les Fées mères » (since 2001), body painting as a tool for self-connection and personal development, has become an obvious choice for AX-ELLE.
Since 2014, AXELLE has been investing in her art, which is as much artistic as therapeutic. She became aware of the vibratory level of her paintings, the beneficial and energetic effect of her painting on people and places.
She named it Soul Painting in 2017.